Shadows & Shapes is a lightweight fantasy RPG with puzzle-like combat. The rules are only a few pages long, and suited for one-shot games. It's free to download. 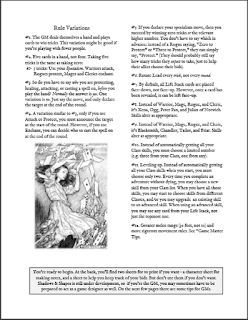 All conflicts in Shadows & Shapes are resolved with playing cards. The combat mechanics are based around a trick-taking card game, so if you've ever played Bridge, Hearts, or Oh Hell, you'll have no trouble picking up Shadows & Shapes.

The combat system has an unusual feel, since the players' decisions are highly constrained. Although strategy is important, there is often a single optimum strategy. Collaboration is at the heart of Shadows & Shapes. If you set a foot wrong, it might be somebody else who pays the price.

The Basic rules feature just four Classes, two spells, no peoples-based abilities, and no movement rules. Combat moves are restricted to the acronym SHAPE:
The Advanced rules add a few more layers and options. The Advanced rules are still pretty simple though!

The overall tone here is of an old school dungeoncrawl, with a few fresh touches. Shadows & Shapes includes ideas for a setting, 'The Vale.' If you like those ideas, you might want to check out Dungeons & Drapers or Skycrawl.

Shadows & Shapes is a fully playable late Alpha game. Any further development would depend on interest. So if you're intrigued, or you enjoy playing it, or have suggestions, drop me a line!

If you are so done with dungeons, the rules shouldn't be hard to adapt to different genres, settings, and stories.