Early Access Edition. Play a candle-maker who moonlights as a mage, or a blacksmith who keeps their suit of platemail in a secret cellar. You'll receive a PDF of the fully playable alpha release, plus any later updates. It's on DriveThruRPG, or it's pay-what-you-want here. 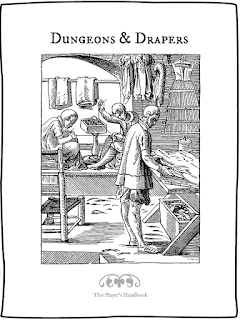 Dungeons & Drapers is a traditional epic fantasy tabletop RPG, based around tried-and-tested mechanics, but sprinkled with quirks and twists. In the Bladed Vale, heroes must hide their heroics. Crawl dungeons and complete quests, but try not to rise to the notice of the Queen, her Five Agencies, and her Worshipful Company of Deniable Assets.

Currently The Player's Handbook is available, a 90-page book containing all the core rules you need to play, and giving a flavor of the setting. To get your digital copy, pay whatever you want. If there are later releases, you'll get access to those as well -- but that said, I have sort of put this aside for now. 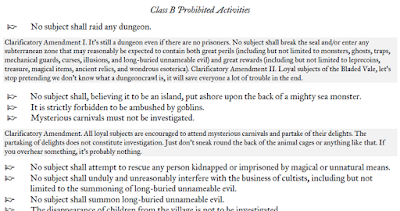 See also the text game Skycrawl, set in the same world (roughly) as Dungeons & Drapers, only without all that blacksmith and tailor stuff.